RECORDS OF OLD CONCORD CHAPTER
OF THE
DAUGHTERS OF THE AMERICAN REVOLUTION, 1894-<1998> 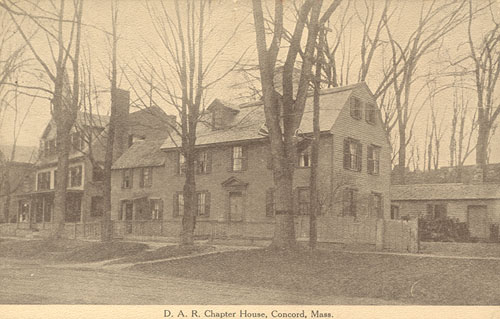 Former DAR Chapter House
Scanned from a postal card.
Not to be reproduced without permission from the
Concord Free Public Library.

HISTORY: The Old Concord Chapter of the DAR was founded in 1894 by 13 women led by Mrs. Daniel Lothrop [Harriet], author of the "Five Little Pepper" books (under the pen name Margaret Sidney) and widow of a Boston publisher. It was the sixth DAR chapter in Massachusetts. The purpose of the organization, stated in its agreement of association, is for "educating the public in patriotism; for the presentation of antiquarian, historical, literary and monumental purposes; for establishing and maintaining libraries; for the association and accommodation of other chapters of the National Society of [sic] Daughters of the American Revolution; and for the establishment and maintenance of places for reading rooms, libraries, or social meetings." The members, all direct descendents of Revolutionary patriots, came from many area towns, although in time, additional DAR chapters were formed in nearby towns and drew away some members of the Old Concord Chapter. There was also one "Real Daughter" of the American Revolution: Mrs. Susan Brigham, born in 1811, whose father had served in the Revolutionary War as a teenager. The group generally met monthly, often to hear a presentation by a member or guest on a colonial or patriotic topic, and sometimes for a program on a subject of general cultural interest or a musical recital. The group contributed to many programs of the National Society of the DAR, donated books to local public libraries, made awards to school children for good citizenship and academic performance, offered its services to support military troops in time of war, and participated in numerous other community projects relating to its interests. In 1909 the chapter bought the "Old Deacon Tolman" house on the easterly side of Monument Square, which is today known as the Pellett/Barrett House at 13/15 Lexington Road. It supported the house for many years with a variety of fund raising efforts that included a public tea room during the 1910s, house tours, fairs and sales, and sometimes rentals of rooms and even the entire house to tenants. Members and friends donated furnishings, some of which were of historic value. In 1929 the chapter built an annex to the house for use as a meeting hall. The house was sold in 1951 and its furnishings sold at auction. Since then the group has continued to meet monthly in members’ homes, working to further the cause of patriotism and good citizenship both in local communities and on a national level through its participation in the National Society DAR activities. The Capt. Isaac Davis Chapter, in Acton, had been founded in 1947 by members of the Old Concord Chapter. When the Capt. Isaac Davis Chapter disbanded in 1984, eleven of its members became members of the Old Concord Chapter. Natasha MacGregor had been active in the Capt. Isaac Davis Chapter and in Acton town committees to celebrate the 1975 bicentennial. Apparently the Capt. Isaac Davis Chapter records and the Town of Acton records became part of this collection at the time that the Capt. Isaac Davis chapter disbanded and Natasha MacGregor joined the Old Concord Chapter. During the 1960s, the Isaac Davis Chapter was active in developing the Isaac Davis Trail. During the same period the Old Concord Chapter erected bronze markers at the Col. James Barrett homestead and at the site of the Doctor Samuel Prescott house to commemorate the roles of those men in the American Revolution. NOTE: Box numbering for this collection begins again at "1" with each series.

SCOPE AND CONTENT: The collection consists of materials generated by the Old Concord Chapter of the DAR and related organizations, including minutes, membership registers, financial records, correspondence, notes, members’ research papers, chapter histories written by members, scrapbooks, pamphlets, brochures, photographs, postcards, artifacts, and newspapers. The materials are arranged topically within each series and then, within the topics, chronologically as much as possible. The records include significant material relating to the history and activities of the Old Concord Chapter; of the 1975 bicentennial celebration of the Concord fight and other town anniversary celebrations in Concord and Acton; of the Capt. Isaac Davis Chapter of the DAR in Acton; and of the Pellet/Barrett House at 13/15 Lexington Road in Concord, which the Old Concord Chapter owned from 1909 to 1951.

SERIES DESCRIPTIONS
Series I. Old Concord Chapter DAR, 1894-1998: Materials generated by the meetings and activities of the Old Concord Chapter, including minutes and business records, financial records, membership records, and chapter yearbooks, citations and certificates of appreciation received by the chapter; informal photographs of chapter members and events, and many news clippings about chapter activities. Chapter activities include members’ personal research on ancestors, cemeteries, and old homesteads; the historic markers for the Col. James Barrett house and the Doctor Samuel Prescott house site; numerous chapter histories written by chapter members; and the purchase, furnishing, refurbishing, maintenance and fundraising for the chapter house at 13/15 Lexington Road between 1909 and 1951.

Series II. Capt. Isaac Davis Chapter DAR and Town of Acton, 1947-1984: Capt. Isaac Davis Chapter materials in this series include minutes and business records; bylaws; correspondence; miscellaneous personal notes; chapter disbandment papers; yearbooks; materials about the markers for the Line of March of the Acton Minutemen; photographs; news clippings; chapter history; and materials relating to the Isaac Davis Chapter’s presentation of the Freedom’s Foundation of Valley Forge’s 1966 award to the Town of Acton . Town of Acton records are between 1950 and 1967 and include: minutes and records of the Advisory Committee on the 1975 Celebration; records about the committee’s commemorative medallion; minutes and celebrations of the Public Ceremonies and Celebrations Committee; and the children’s musical celebration of the American Revolution, "I Hear a Drum," written by Ann Barton, Lynne Salisbury, and Connie Thomas in 1974.

Series IV. Oversize Materials and Artifacts: This series includes all materials too large to fit into standard 8 ½ x11 manila folders. The Oversize Materials includes newspapers, oversize documents of the Old Concord Chapter; and oversize pamphlets and brochures of numerous other organizations. The Artifacts include small materials too bulky to store safely in the 8 ½ x11 folders with the other papers. All the materials in both of these boxes have been listed in two places in the Box and Folder List: once in the Oversize Materials or Artifact Box list where they are stored, and a second time in the series and box list in which they belong intellectually, although they are identified by their locational box numbers (Box 16 for Oversize Materials and Box 17 for Artifacts).

SOURCE OF ACQUISITION: The Old Concord Chapter DAR gave this collection to the Concord Free Public Library Special Collections on October 6, 1998. Their representative was Carolyn Holbrook.

PROCESSED BY: This collection was processed by Simmons College GSLIS intern Josie Manternach with assistance from volunteer Marie Eaton and under the guidance of Special Collections Curator Leslie Perrin Wilson, May 1999.

NOTES/COMMENTS: Newspaper clippings have been photocopied when it was possible and the originals have been discarded.

SERIES I:
OLD CONCORD CHAPTER
OF THE
DAUGHTERS OF THE AMERICAN REVOLUTION, 1894-1998

Folder 23
Citations and Certificates of Appreciation

Folder 2
Photographs B&w snapshots, together in an envelope w. negatives

Folder 8
Markers for Line of March for Acton Minutemen

Advisory Committee on the 1975 Celebration
Folder 2
Minutes and Business Records, 1971

Bicentennial Miscellany
Folder 12
-- "The White Cockade," [sheet music] arr. By George V. Doren and Constantine Liberakis
-- "I Hear a Drum," by Ann Barton, Lynne Salisbury, and Connie Thomas, 1974 [a musical "celebration of the Bicentennial for a children’s chorus"]

Folder 7
"Manual of the [U.S.] for the Information of Immigrants and Foreigners," 1924

Box 4 – Other Organizations
Folder 1
Children of the American Revolution

Folder 2
Massachusetts Society of the Sons of the American Revolution

Folder 4
Other Groups and Organizations, Bicentennial Records
-- "The Nineteenth of April in Concord, Massachusetts, 1775-1961" [booklet]