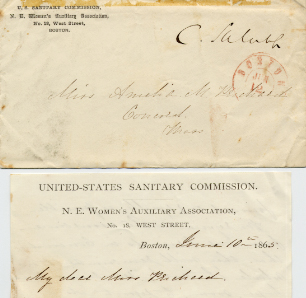 SCOPE AND CONTENT:  Records, 1861-1865, as follows.  Three ms. record volumes: one (bound), 1861-1865, primarily in the hand of Harriette Moore, containing membership list with records of dues paid, minutes, records of articles made, boxed, and sent to soldiers, copied letters and acknowledgement and thanks, and printed report for 1862 (pasted in); one (bound), 1861-1863, in the hand of Grindall Reynolds, containing records of meetings and of articles made, boxed, and sent (the latter part of this volume used by Reynolds as a personal/family account book, 1861-1868); one (in paper wrapper), 1861-1863, in the hand of Harriette Moore, containing minutes, records of articles made, boxed, and sent, and membership list.  Printed reports of the Society (1862, 1863, and 1864) and one ms. report (1865).  Letters of acknowledgement and thanks for supplies received from the Society, 1862-1865, including many from the U.S. Sanitary Commission, New England Women’s Auxiliary in Boston; also including letters from the U.S. Army Hospital in Philadelphia, the Massachusetts Military State Agency in Washington, and the Massachusetts Soldier’s Relief Association in Washington.  Miscellaneous items, including a ms. recipe for blackberry cordial and printed materials (1864) issued by the U.S. Sanitary Commission and its New England Women’s Auxiliary.

c2005 Concord Free Public Library, Concord, Mass. Not to be reproduced without permission from the library.