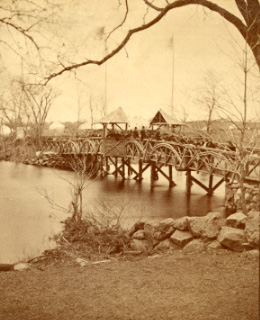 Victorian Bridge and Celebration Tents, 1875
Not to be reproduced without permission from the Concord Free Public Library.

HISTORY: Committee of thirty appointed at the March, 1874 town meeting in Concord, Mass., to arrange for the celebration in Concord of the centennial anniversary of the Concord Fight. Officers: George Keyes, Chairman; Samuel Hoar, Secretary; Henry J. Walcott, Treasurer. The preparations were made by an Executive Committee with the aid of the following subcommittees: On General Invitations (Ebenezer Rockwood Hoar, Ralph Waldo Emerson, and George Heywood); On the Oration; On the Dinner; To Invite Participating Towns; On Music; On the Press; On Military; On Decorations; On the Ball; On Transportation; On Reception of Guests (including R.W. Emerson). A Monument Committee had earlier been chosen to arrange for the erection of a monument at the North Bridge commemorating the American soldiers of April 19, 1775. This separate committee, chaired by John Shepard Keyes, engaged Concord sculptor Daniel Chester French. The unveiling and dedication of French’s bronze Minute Man Statue were part of the ceremonies of April 19, 1875.

Concord and Lexington initially attempted to plan a joint celebration, but by October 17, 1874 negotiations toward that end had failed.

Invitations to Concord’s celebration were sent to representatives of numerous towns, to representatives of state and national government and of various organizations (for example, the Bunker Hill Memorial Association, the Massachusetts Historical Society, and the New England Historic Genealogical Society), and to individuals. President Ulysses S. Grant, Vice President Henry Wilson, Secretary of War William Worth Belknap, Secretary of State Hamilton Fish, and Massachusetts Governor William Gaston were among the dignitaries attending. Major General Francis C. Barlow was Chief Marshall of the procession.

A religious service at the First Parish on Sunday, April 18 preceded the formal ceremonies on April 19. Well-known author George William Curtis delivered the major oration on the 19th. The celebration included dinner under a tent for over 4,000. Despite considerable advance planning, Concord was unprepared for the influx of over 50,000 people turning out for the celebration. In 1876, the Committee of Arrangements published its Proceedings at the Centennial Celebration of Concord Flight; its financial statement appeared in the 1875/1876 printed town report.

SCOPE AND CONTENT: Records (1873-1876) include: minutes of committee meetings; correspondence and printed list concerning membership; correspondence and manuscript report relating to negotiations between Lexington and Concord for a joint celebration; contract with James Pierce and Charles E. Felker for the dinner; general correspondence (1874 Dec. 28-1875 Apr. 15), correspondence relating to the presidential visit (1875 Feb. 25-Apr.1), and responses to invitations by representatives of towns, representatives of state and national government and of organizations, and individuals (all of the responses dated between 1874 Dec. 15 and 1875 Apr. 28; the responses by individuals including letters from Charles Francis Adams, George Bancroft, Phillips Brooks, William Cullen Bryant, James Freeman Clarke, Edward Everett Hale, Oliver Wendell Holmes, Edward Jarvis, Henry Wadsworth Longfellow, James Russell Lowell, Josiah Quincy, and W.S. Robinson); holograph manuscripts (remarks by John S. Keyes at unveiling of Minuteman Statue, score of "Centennial March" written by David Wallis Reeves for the occasion, and oration Concord Fight by George William Curtis, accompanied by correspondence between Curtis and the Committee of Arrangements about the oration, 1874 Oct. 16-1875 Mar. 27); manuscript poem (in series Miscellaneous) "The Battle Cry of the Revolution," by Eliza G. Cogswell of Salem; printed handbills, invitations, tickets, etc.; printed Proceedings at the Centennial Celebration of Concord Fight, April 19, 1875 (1876).

ASSOCIATED MATERIALS: Subseries B (Responses of the Committee on General Invitations for the Celebration in Concord of the Centennial of the Concord Fight) of Series II (Ebenezer Rockwood Hoar Papers) in the collection Hoar Family Papers (Vault A45, Hoar, Unit 1), also in the CFPL Special Collections, includes many additional responses to the Committee on General Invitations, of which E.R. Hoar was a member.

Box 2, Folder 9:
SERIES X. MISCELLANEOUS, 1875 (in entirety; includes three items, among them a manuscript poem, “The Battle Cry of the Revolution,” by Eliza G. Cogswell of Salem).