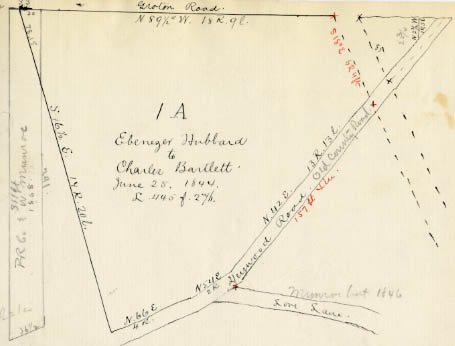 Not to be reproduced without permission from the Concord Free Public Library.

BIOGRAPHY: Charles Hosmer Walcott was a lawyer in Concord, Massachusetts. The son of Joel Walcott, he was born (1848) and died (1901) in Concord. He graduated from Harvard in 1870 and studied law at Harvard Law School and in the office of Ebenezer Rockwood Hoar. In 1872, he became a partner in the Boston law firm of Buswell, Howe, & Walcott and also opened a law office in Concord. Walcott's legal work consisted largely of conveyancing. In 1886, he was appointed to the newly established State Board of Arbitration. He served Concord through a variety of offices, boards, and committees. He was Superintendent of Schools (1872), Assessor, Selectman, Overseer of the Poor, Library Committee member, and a member of committees for the 1875 centennial celebration of the Battle of Concord and the 1885 celebration of the 250th anniversary of the town's incorporation. Walcott was President of the Middlesex Institution for Savings. He was also a member of the Concord Antiquarian Society, the Social Circle in Concord, Shakespeare Club, Saturday Club, and Tuesday Club, as well as Curator of the Concord Lyceum. Walcott was married twice: in 1875 to Florence Keyes (daughter of John Shepard and Martha Lawrence Prescott Keyes), who died in 1877 shortly after the birth of their second son; in 1891 to Jessie McDermott, with whom he also had two children. Walcott published Concord in the Colonial Period in 1884 and Sir Archibald Campbell of Inverneill in 1898.

SCOPE AND CONTENT: Series I consists of eleven manuscript volumes containing title examinations for properties in Middlesex, Norfolk, and Suffolk Counties, Massachusetts [ca. 1880]-1901 (but relating to property transactions going much farther back in time than the date span of compilation reflects). Volumes include many properties in Concord as well as properties in Acton, Bedford, Boston, Cambridge, Carlisle, Chelmsford, Chelsea, Dedham, Lexington, Lincoln, Littleton, Lowell, Marlborough, Maynard, Medford, Melrose, Sharon, Somerville, Stow, Sudbury, Waltham, Watertown, and elsewhere. Series II contains one bound volume and one folder of loose sheets of notes on properties, land, and roads in Concord [ca. 1875]-1897, and three folders of loose notes on roads. Loose notes are also available as a typewritten transcript (1978). Series III contains letters from Horace R. Hosmer to Charles H. Walcott [1889-1892]. Letters discuss Concord and other local history and genealogy, including the story of the “Acton Pirate” related to Walcott by Hosmer.

SERIES I: TITLE EXAMINATIONS FOR PROPERTIES IN
MIDDLESEX, NORFOLK, AND SUFFOLK COUNTIES, [ca. 1880] -1901

So. Billerica and Bedford