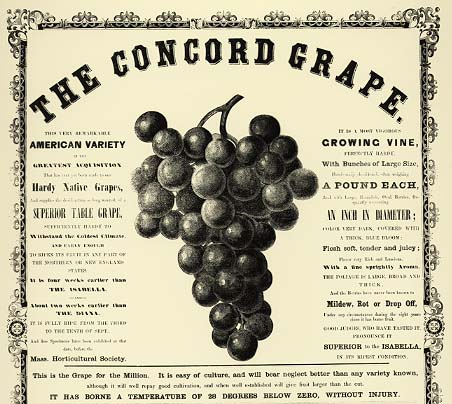 Broadside from CFPL Broadside Collection.
Not to be reproduced without permission from the Concord Free Public Library.

BIOGRAPHY: Goldsmith, politician, horticulturist, and originator of the Concord Grape; resident of Concord, Mass. Born in Boston, March 4, 1806; died in Concord, Sept. 26, 1895. Siblings included Daniel, who died young, John Clark (wife: Melissa), Albert Chester (wife: R.A. [Ann]), who later changed his last name to Lawrence, Elizabeth Shepard (unmarried), and Harriet Morton (husband: James Barrows). Educated in the Boston public schools; apprenticed at an early age to Boston goldbeater Louis Lauriat, then worked for another goldbeater in Dorchester. In 1826, married Mary Ellen Walker, who died in 1891 in Medford, Mass., having lived separately from her husband for the previous twenty years. Father of three children: Mary Ellen Drury (husband: George W. Lauriat), Ephraim Wales (wife: Fanny Graham), and John Clark (wife: Abbie Staples). Joined the military company known as the Dorchester Rifles; commissioned Ensign in the regiment of Light Infantry, 1st Brigade, 1st Division, Oct. 6, 1834; discharged Apr. 13, 1836. Moved to Concord, Aug. 1836; practiced goldbeating irregularly until about 1874. During 1840’s, began to cultivate grapes; Concord Grape first marketed by C.M. Hovey of Boston in 1854. Other grape varieties produced: Esther, Rockwood, Iona, August Rose. Member of the Concord Social Circle. 1857-1861, served on the Concord School Committee. 1860-1861, served on the Concord Board of Selectmen. In 1854, became member of Corinthian Lodge of Freemasons, Secretary in 1856, 1857, 1858, Master in 1863. In 1855, elected member of the Mass. Legislature for the American Party, served as House Chairman of the Committee of Agriculture. In 1856, elected to Mass. State Senate and served on same committee, and on Roads and Bridges, of which he was chairman. In 1856, Governor Gardner appointed him member at large of the Mass. Board of Agriculture, on which he served for the next 12 years. During this time lectured three times at Harvard; often spoke at agricultural/horticultural meetings and fairs. In 1873, honored by Mass. Horticultural Society for the development of the Concord Grape and in ca. 1893 by the American Association of Nurserymen. Injured in 1893, moved to Concord Home for the Aged, where he died in 1895.

SCOPE AND CONTENT: Correspondence, business papers, financial papers. Collection includes papers from Bull’s goldbeating business, his work in agriculture/viticulture, and his public and political life. The financial papers include dealings with local people, merchants, and firms. Letters from John C. Bull contain comments on health matters, Native Americans in the western U.S., and California agriculture. Letters from Albert Chester Lawrence contain comments on mental illness and family relations. Letters from George W. Lauriat were written from Massachusetts and the Washington, D.C. area, where Lauriat was first a Union soldier, and then an officer, during the Civil War. Letters from Melissa C. Bull and R.A. (Ann) Lawrence contain comments on mental illness, family relations, and health matters. Papers include several unsigned essays in Bull’s hand, one about the process of grape cultivation.

The letters from John C. Bull contain many comments on health matters. One letter describes the massacre of Native Americans by U.S. soldiers at Eel River in California in 1860. The letters from Albert C. Lawrence contain many comments on the mental illness that afflicted his brother, John C. Bull and the actions that various family members took concerning his illness.

The letters from George W. Lauriat, Bull’s employee in his goldbeating business, and later, his son-in-law, were written from the field while Lauriat was first a Corpl., then Sergt. with the 5th Regiment Mass. Volunteer Infantry, then later a Sergt., Lieut., Capt., and Major with the 32nd Regiment Mass. Volunteer Infantry, during the Civil War in the Washington, D.C. area and in Massachusetts.

Series IV. Public Life, 1841-1862: This series consists of papers generated by Bull during his years as a public servant, as a member of Concord’s School Committee, while serving on the Concord Board of Selectmen, and from his time with the Mass. Board of Agriculture. It includes manuscript forms of 1861 Concord town reports and circulars that the Board of Agriculture sent out to Mass. farmers requesting information on grain crops, cattle husbandry and diseases of vegetation. There are also miscellaneous items concerning Bull’s work with political district committees, the Hoosac Tunnel, and one item concerning the Registry of Deeds, Middlesex North.

SOURCES OF ACQUISITION: Bulk of collection donated to the Library in 1929 by Mr. Edward McKenna (letter on file in Special Collections). Account book found at Concord Home for the Aged sometime after Bull’s death and donated by a Mr. Conant (see note pasted onto inside of front cover).

Massachusetts Board of Agriculture: