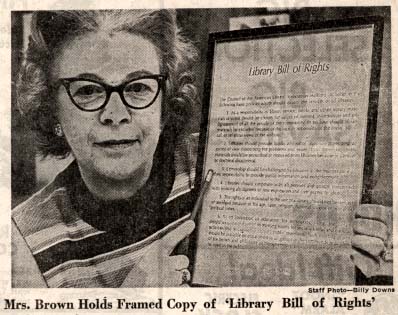 BIOGRAPHY: Tomlin E. Brown (later Coggan) was born April 9, 1914, in Fresno, California, the daughter of Hiram Wheeler Edwards, a physics professor at Berkeley, and his wife, Vena Marvella Tomlin Edwards.  Mrs. Brown resided in Concord Massachusetts from 1953 – 1961, with her then-husband E. Cary Brown, an economics professor at MIT. They later divorced. She served on the school board committee in Concord from 1958 to 1961, holding the position of Secretary. She also served on the Concord-Carlisle Regional School District Committee, 1960 – 1961. After leaving Concord, she worked as administrative secretary for Congressman Gillis W. Long of Louisiana.

In 1966 Mrs. Brown took the entrance exams for Emory Graduate School of Arts and Sciences in the Department of Librarianship. She was later head librarian at the Avis G. Williams branch of the DeKalb County Public Library.  On June 1, 1970, an IRS agent visited the library and asked Ms. Brown if it would be possible to tag certain books as “militant and subversive” so that patrons who checked them out could be identified and tracked. Mrs. Brown resisted the proposal and informed the agent that she believed that any public library patron had the right to privacy regarding his or her choice of reading material. The incident was widely publicized and reported in many newspaper and magazine articles. Mrs. Brown appeared on the Today show and CBS news and was honored by the ACLU for her actions.

SCOPE AND CONTENT: The collection consists mainly of materials related to Mrs. Brown’s actions in July of 1970.  Newspaper, magazine and newsletter reports about her actions are filed in Series I. Series I also includes letters and postcards written to Mrs. Brown following her appearances on the CBS news and the Today show.  Although the overwhelming majority are positive, the letters vary in the reactions expressed, ranging from congratulatory to outraged, and the writers include both private citizens and organizations. Many letters include brief notes added by Mrs. Brown. Series I also contains Mrs. Brown’s personal accounts of the incident and includes notes for a speech about it, possibly delivered at the ACLU’s annual Bill of Rights Dinner in 1970 where she was honored, along with the actress Jane Fonda, with the organization’s annual civil liberties award. Materials related to Ms. Brown’s earlier life, including a note of thanks for her service as secretary from Congressman Gillis W. Long and her qualifying exam results at Emory are in Series II. This series also includes a 1983 letter written to Mrs. Brown from Frances O’ Brien of the Blue River Library in Oregon, acknowledging Mrs. Brown’s letter of support written after seeing a television report about the Blue River Library.