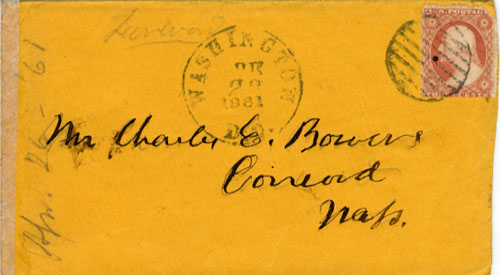 Captain Charles Bowers (1812-1895) was born and died in Concord, Massachusetts. He married Lydia E. Hadlock on and they had three sons, including William and Charles E. Bowers, and five daughters, including Maria Augusta Hadlock Bowers (French). Captain Bowers was active in both temperance and anti-slavery causes. He served in the military from 1861 to 1865, the duration of the Civil War, and is buried in .

William Bowers, the son of Captain Charles and Lydia Bowers, was born in Concord, Massachusetts in 1840. He was apprenticed as a printer before entering the newspaper business, working for the Boston Post and then the Boston Herald in 1859. He was the night editor at the Boston Herald and was later promoted to day editor, becoming a prominent member of Boston’s newspaper community and a member of the Press Club. At the beginning of the Civil War he went out with the Fifth Massachusetts Volunteer Militia and was in the first battle of Bull Run. In 1867 William Bowers married Ellen F. Staples of Concord, the daughter of Sam Staples, who was legendary as the man who jailed Thoreau for non-payment of his poll tax.

Charles E. Bowers, the son of Captain Charles and Lydia Bowers, was born in Concord, Massachusetts in 1844. He enlisted for military duty at the age of eighteen, serving for most of the duration of the war. Severely wounded at the Devil’s Den during the Battle of Gettysburg, he wrote an account of his experiences during the fight. He was later employed in the wholesale boot and shoe business.

SCOPE AND CONTENT: Series I includes letters written in the earliest days of the Civil War from Captain Charles Bowers to his sons William Bowers and Charles E. Bowers. Captain Bowers was at that time a 3rd Lieutenant with the Fifth Massachusetts Volunteer Militia, encamped at Washington, D.C. The letters contain narratives of military and camp life, troop movements, and personal observations. People mentioned include Colonel George Lincoln Prescott and President Abraham Lincoln; places include Harpers Ferry and Alexandria, Virginia. The last letter to William is dated , just prior to his enlistment. There is one letter from William to his brother, Charles E., . Series also includes an undated military roster and “Orders of the Day.” Series II includes Lieutenant Charles E. Bowers account of his participation in and being wounded during the Battle of Gettysburg at the Devil’s Den on 2 July 1863; Maria Augusta Hadlock Bowers French’s personal reminiscences (here in photocopied form) of growing up in the Concord, 1846-1864, include portraits of her family as well as her familiarity and acquaintance with the Emersons, Hawthornes, Alcotts, and other well-known Concordians. Reminiscences accompanied by two ALS, Augusta Hume to Marcia Moss, 28 August and .  Obituaries for Captain Charles Bowers, William Bowers, and Charles E. Bowers provide biographical and anecdotal information about their lives.