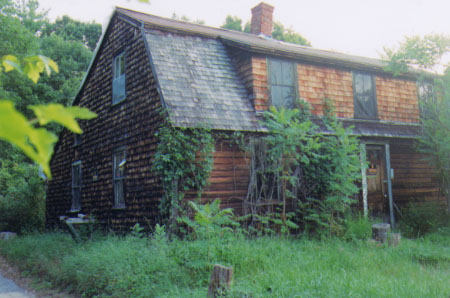 Photograph of the Ball-Tarbell-Benson House, 2001

FAMILY BIOGRAPHY AND HISTORY:  The property at 265 Ball’s Hill Road in Concord, Massachusetts, was purchased around 1723 by Caleb Ball and his wife Experience Flagg Ball. Current research dates construction of the house and outbuildings between 1726 and 1740. The house was owned by the Ball family, their in-laws the Tarbells, and finally the Benson family before it was sold to the Town of Concord in 2001. Family histories and genealogy are available with the collection. The house and barn were dismantled by September of 2001. At the time of deconstruction, few structural changes had been made to the house, making it a strong example of first period New England architecture. The land where the house and barn were originally located is now privately owned. Half of the remaining land was marked for conservation. The other half is marked to be used for a new town well. According to the 2005 printed Concord town report, work on the Brewster well (situated on the former Benson property) was placed on hold due to new State Water Management Act policies.  The deconstruction project was initiated and supported by Concord native Jeri Bemis.

SCOPE AND CONTENT: Papers, news articles, and photographs collected by the Concord Historical Commission relating to the history and deconstruction of the Ball-Tarbell-Benson house and barn, formerly at 265 Ball’s Hill Road, Concord, Massachusetts. Also includes correspondence between project members, the Concord Historical Commission, the Massachusetts Historical Commission, the University of Massachusetts Environmental Institute, and project contractors (including David Ottinger). Deed and genealogical research included. Collection also contains property maps and drawings of building layouts, some by Wayne Perry. Photographs mostly of deconstruction process, with before and after shots. Some photocopies of Herbert W. Gleason photographs as well. Oversize documents in separate folders. The dates of documents in the collection span from 1723 to 2005, though the majority of materials date from between 2000 and 2005.


SOURCE OF AQUISITION: Gift of the Concord Historical Commission via Sarah Wilbur, May 3, 2005.

Box 1, Folder 1:
Documentation of the collection at the time of donation (2001 - 2005)
Including lists and overview of material, correspondence, and library display ideas.