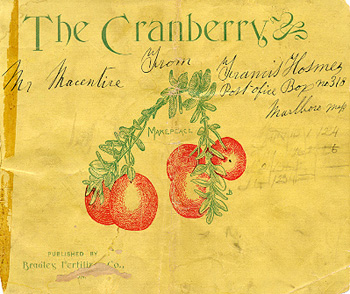 BIOGRAPHY: Esther Howe Wheeler Anderson was born on July 26, 1891, in Concord, Mass.  She was the daughter of Frank Wheeler and Lucie Howe Brigham Wheeler.  Her father, a successful market gardener at Nine Acre Corner, died in 1919.  After his death, she managed the family farm for many years.  She married Leslie O. Anderson in 1920, and raised a family in Concord.  She was a lifelong member of the First Parish Church in Concord, where she was active in the Women’s Parish Association.  She was also an avid Thoreauvian and a member of the Thoreau Society.  She belonged to the Concord Art Association, the Concord Antiquarian Society, the Middlesex Canal Association, and the Massachusetts Herb Society.  An accomplished landscape photographer, Mrs. Anderson was known for her slide lectures on Thoreau Country, , and other subjects.  She died February 28, 1985, and was buried in the family plot in Sleepy Hollow Cemetery.

SCOPE AND CONTENT:  A compilation of publications primarily concerning herbs, their propagation, and uses, dating mainly from the late 1930s and early 1940s, gathered by Esther Howe Wheeler Anderson.

Folder 1:
Herbs and their uses, 1936-1941 (some undated):
Herbs, by Foley, 1936
Herbs and Their Uses, by Schrumpf  and Clapp
Condiment Plants, by Crooks and Sievers, 1941
Herbs: Their Culture and Use, by Brooks, 1936
Savory or Aromatic Herbs in the Kitchen Garden, by Beattie

Folder 2:
Herb bibliography, 1942-1963 (some undated):
List of Herb Publications
Books for Gardeners, by the Mass. Horticultural Society, 1963
The Herb Grower Library, by the Herb Grower Magazine, 1956
A Suggested Reading List of Herbs, y the Herb Society of America, 1942
Herb Books Presented to the Library, [1937]

Folder 3:
Medicine, 1915-1941:
Medicinal Herbs and Condiments Grown Successfully in New Hampshire, by the WPA, 1940
Medicinal Plants, by Crooks, 1941
Drug Plants Under Cultivation, by Stockberger, 1936 (revision of 1915 edition)
Medicinal Herbs Needed Today That Can Be Grown or Gathered in New England, by the Herb Society of America, 1941

Folder 5:
Drying, 1943-1945:
Influence of Drying on the Flavor of Various Culinary Herbs, by the Herb Society of America, 1945
Victory Gardens: Harvesting and Drying, by Marguerite Ickis