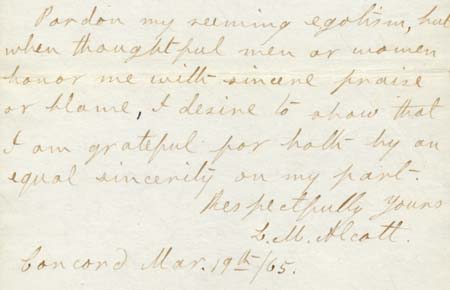 SCOPE AND CONTENT: Correspondence includes eight letters and five poems from Louisa May Alcott to various correspondents, [1856]-1885, plus undated; four letters from Abigail May Alcott to several correspondents, [1862]-1872, including two ALS to Mrs. [Cynthia] Thoreau; two ALS from May Alcott Nieriker to her mother, 1877; three ALS (two partial only) from Ernest Nieriker, 1879-[1880]; three letters (one typed transcript, two original ALS) from Anna Bronson Alcott Pratt, 1871-[1889], one of them to her son Frederic Alcott Pratt and his family, one to Frederic alone; two ALS to Frederic Alcott Pratt, 1889 (one from John Sewall Pratt (Alcott) ), and one TLS from F. Alcott Pratt to Allen French, 1900 (poem enclosed); one ALS (invitation to opening of "The Alcott House" from Carrie M. Hoyle—Secretary of the Louisa May Alcott Memorial Association—to Bronson Alcott Pratt), 1912.

Folder 1a:
ALS to Mrs. Talbot "Dec. 30, [1880]," on the hiring of a domestic, Mrs. Willis's case of the measles and sore throat, and Concord matters (including the engagement of Myrtle Whitcomb to Samuel Ripley Bartlett). Letter in custom slipcase.

Part of ALS regarding shipping of May’s things back to Concord after her death in 1879.

Part of another ALS regarding conveyance of May’s daughter and some of May’s things to Concord, [1880].

ALS, Carrie M. Hoyle "To Mr. Alcott Pratt," 1912 May 17 (invitation from Hoyle as Secretary of Louisa May Alcott Memorial Association to opening of the Alcott House).