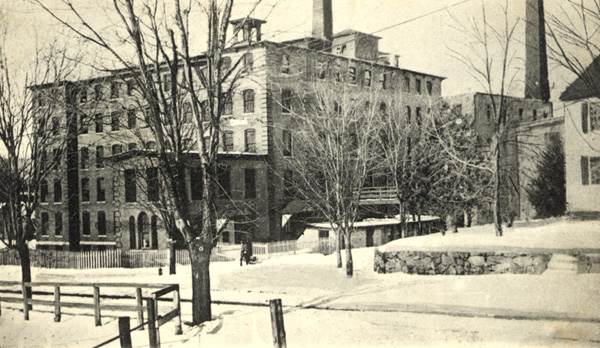 In 1862, when Edward Carver Damon engaged renowned Worcester architect Elbridge Boyden to design a mill complex to replace one that had burned down, he made a decision that would almost assure the place of Damon Mill in Concord’s history. Designed in the Italianate style, its classic lines transcended the utilitarian mission of the mill in its own day.

The area where the Damon Mill now stands has been associated with industry and manufacturing almost since the founding of Concord. Beginning in the mid-seventeenth century, the area was home to an iron works, as well as saw, grist, and fulling mills. The current of the Assabet River supplied the power to keep the mill wheels turning and the water necessary for processing. The present Damon Mill was preceded by a wooden mill building more than one hundred feet long where cotton yarn was produced. The mill passed through several hands before it was purchased in 1834 by Calvin Carver Damon. With years of experience in the textile business, Damon expanded the business, shifting production from cotton, to satinet, and finally to domett cloth, a combination of wool and cotton that he invented and very successfully marketed.

When Calvin Damon died in 1854, his seventeen-year-old son Edward Carver Damon took over the business. Edward combined a good education with years of hands-on experience in all aspects of the mill’s operation, and in spite of his youth, ably succeeded his father. Edward not only kept the business running, he developed and expanded it, responding to changes in the marketplace and the economy. In 1861, Damon Mill received an order to produce fifty thousand yards of fabric for the U.S. Army. Just as the order was completed, the mill caught fire and burned to the ground, a total loss. Almost immediately Edward Damon began the rebuilding process, the result of which is the structure seen today at the intersection of Pond Lane and Main Street in West Concord. The name on the dedication tablet, Damondale, blends the names of Damon and Eben Dale, Damon’s selling agent at the time of the rebuilding.

Many years of prosperity followed the rebuilding of the mill. In that time, the area that had been called Factory Village grew in size and sophistication. The presence of the mill engendered a neighborhood that included housing, a store, a school, improved roads, and railroad lines. Westvale, as it was now called, thrived as a result of Damon Mill. In a decade its name would change to Concord Junction, and later West Concord, as we know it today.

But during the 1880s the mill began to experience financial problems. Edward Damon, now joined in business by his son Ralph, purchased controlling interest and reorganized as Damon Manufacturing Company. They constructed a rear addition to the mill with a chimney to house two coal boilers. Recognizing that the market for flannel was declining, the Damons converted the mill to the production of dress goods. But with textile manufacturing beginning to move out of New England, and because of the mill’s small size, staying competitive became increasingly difficult. In 1893 the mill was mortgaged to the Middlesex Institution for Savings and in 1898 came the final blow—the bank sold the mill and the days of the Damon Mill came to an end.

By the late nineteenth century Concord Junction was a vital, bustling community. The Damon Mill complex continued to function, first as a manufactory, and then once again as a mill under the auspices of the Strathmore Worsted Company until that business, too, failed following the World War I manufacturing boom. It was then purchased by Jack Lord of Stow, and for fifty years served as a cold storage facility for apples, a staple New England crop. By the 1970s the mill was falling into disrepair until it caught the attention of developer Bill Sullivan, who interested Richard Damon, Calvin Carver Damon’s great-great grandson, in an effort to restore the building. After several years of work, it reopened as Damonmill Square and in 1980 earned a place on the National Register of Historic Places. Housing businesses and offices, it no longer functions as a mill, but retains the spirit of commerce in a sensitive restoration of one of Concord’s landmark structures.