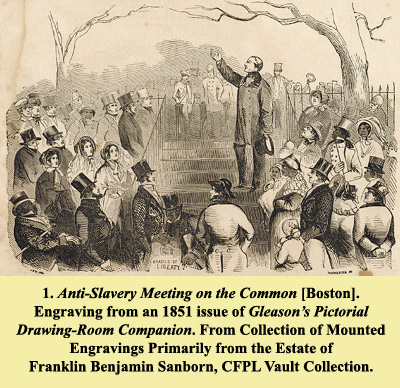 Largely through the words and deeds of Henry David Thoreau and Ralph Waldo Emerson, Concord, Massachusetts has gone into the historical record as an antislavery "hotbed."  Though initially skeptical of collective reform efforts, by the 1850s Thoreau spoke out aggressively against slavery and in defense of John Brown, while Emerson's embrace of the cause evolved over twenty years from near indifference to full-blown militance.  Like Thoreau, in 1859 Emerson praised John Brown, outraging the nation by echoing abolitionist Mattie Griffith's prediction that Brown would "make the gallows glorious like the cross."

Yet the first stirrings of antislavery sentiment in this historic town began decades before these men took up the cry.  In the 1830s and 1840s, it was ordinary townsfolk, including a slaveowner's daughter and a former slave, who worked together to foment a radical reform consciousness that eventually led to Concord's sustained participation in the Underground Railroad and its highly publicized role in memorializing John Brown.  But it was a thirty-year, uphill battle, which divided this community.

Shortly after abolitionist pioneer William Lloyd Garrison founded the Liberator in Boston in January 1831, townsmen at the Concord Lyceum had begun to debate—and to soundly disapprove of—the very idea of an organized social movement against slavery.  Nevertheless, Concord's earliest subscribers to the paper—including Dr. Josiah Bartlett, Samuel and Susan Barrett, William Whiting, Timothy and Maria Prescott, and the Thoreau family—circulated the paper through town, generating controversy but also increasing the local audience for antislavery lecturers such as William Lloyd Garrison, Wendell Phillips, Angelina Grimké, and, later, Frederick Douglass.  Town clergy—the Reverend Ezra Ripley at the Unitarian First Parish and the Reverend John Wilder from the Trinitarian pulpit—also voiced support for the fledgling movement; indeed, Wilder regularly invited abolitionists to speak at his church.

Two local organizations founded in the 1830s proved instrumental to the movement's growth: The Middlesex County Antislavery Society in 1834, and in October 1837, the Concord Female Antislavery Society, the first president of which was Mary Wilder, John's wife.  Long celebrated with nearby Lexington as the birthplace of the American Revolution, Concord now became a forum for Garrison's strident call for immediate emancipation as local women and men led petition drives, organized fundraisers, and forged ties with national and state antislavery leaders.

By the mid-1840s, ongoing mobilization efforts and antiabolitionist backlash strengthened the alliance between Concord and Boston activists as local reformers developed creative strategies and persevered in their efforts despite being impeded by conservative townsmen.  The eloquent Boston abolitionist Wendell Phillips spoke to conflicted audiences here on three memorable occasions, dividing the membership of the Concord Lyceum but strengthening the resolve of his supporters.  Under the relentless direction of Concord native Mary Merrick Brooks, the female antislavery society joined neighboring towns in hosting antislavery "celebrations" on August 1st to commemorate the anniversary of emancipation in the West Indies.  The first of these events in 1844 marked a shift in Waldo Emerson's public commitment to antislavery as Concord's leading intellectual addressed a gathering that included Frederick Douglass.  Emerson responded even more stridently to the issue later that year when his esteemed townsman and friend, Squire Samuel Hoar, was humiliated by the South Carolina government, which had defied protocol and denied Hoar's diplomatic mission there on behalf of the Massachusetts governor.  Denouncing Hoar as "the emissary of a Foreign Government, hostile to our domestic institutions," South Carolina lawmakers called on their governor "to expel" him from the state.

Two years later, Henry Thoreau followed up his protest of the Mexican War and his resulting night in jail by co-hosting the female society's August 1st celebration in 1846 at Walden Pond, the second instance of his direct service to this organization, the members of which included most of his family.  Also in this decade, antislavery zealots in Concord, including Cynthia, Sophia, and Helen Thoreau (Henry's mother and sisters), signed on to Garrison's most radical measure to date—disunion—which called for northern secession from the slaveholding South.  By the end of the 1840s, Wendell Phillips credited women's efforts in general and Mary Brooks's influence on Waldo Emerson in particular for the "gradual, silent, but steady, growth of reform in towns where a few women, all alone, have given their hearts to it."  Despite these persistent efforts, and despite Henry Thoreau's memorable appeal in Civil Disobedience for "one HONEST man" to join him in jail, the 1840s ended with a vast, westward expansion of slavery—courtesy of the United States victory in the Mexican War—and the prospects for immediate abolition seemed dim indeed.

The 1850s indisputably constituted the most turbulent era in the antebellum abolitionist crusade, a decade in which southern legislators dominated Congress and a series of proslavery chief executives marshaled their majority forces to ensure the perpetuation of "the peculiar institution."  The first legislative volley came in September 1850 when Congress passed a revamped Fugitive Slave Law as a key provision of the Compromise of 1850.  In northern communities including Concord, tension heightened, and Garrison's nonviolent tactics lost ground as abolitionists violently resisted this law.  Then the Underground Railroad, an informal network used for years to aid escaping slaves, achieved its legendary stature, becoming more organized and far busier.  In varying degrees, Concord became caught up in all of the major fugitive slave cases that occurred in Boston in the early 1850s: William and Ellen Craft had lectured here; Shadrach Minkins arrived on a Concord doorstep en route to freedom; and Thomas Sims and Anthony Burns provoked Henry Thoreau to an unprecedented public alliance with the nation's most prominent abolitionists, prompting his first and only lecture at an organized antislavery rally, an occasion on which he denounced the government and its leaders, proclaiming that his "thoughts" were "murder to the State."

Antebellum abolitionism reached its climax during the mid- and late 1850s as Concord activists participated in the groundswell of support for "Free Kansas," a struggle that led many, especially a second generation of reformers, to abandon Garrison's doctrine of nonviolence.  A new schoolmaster who chaired the state Kansas Committee, Franklin Benjamin Sanborn, ensured that Concord would play a leading role in this final phase of the struggle.  Sanborn intensified the commitment of local activists, and as one of the "Secret Six" conspirators who financed John Brown's raid on the federal arsenal at Harpers Ferry, Virginia in October 1859, he linked the town to Brown's infamous attack on slavery.  It was Henry Thoreau, however, who in an impassioned speech publicly backed Brown and his armed incursion—and it was Thoreau who became an accomplice to this act of radical extremism when he helped Harpers Ferry raider Francis Jackson Meriam, one of the most wanted men in the country, flee to Canada.

By the turn of the decade, on the eve of the Civil War, a tense political atmosphere prevailed in the northern states.  In Concord, conservatives and moderates worked alongside former adversaries toward a common goal of immediate emancipation.  A second wave of female abolitionists thrilled to the prospect of war, a sentiment in which they were encouraged by Harriet Tubman, who visited Concord during these years.  Soon their harshest critics had rallied to the abolitionists' side.  Many in Concord, including Henry Thoreau and Waldo Emerson, had now arrived at an explicit acceptance of violence in the struggle to free four million people.  The Slave Power's encroachment into Massachusetts, and personal encounters with desperate and courageous black men and women, had finally convinced many in the nation that military action would likely be required—and certainly could be justified—to end the scourge of slavery, itself sustained by violence, in the United States.  If ending slavery meant civil war, then many Concord residents had decided it was worth the cost.