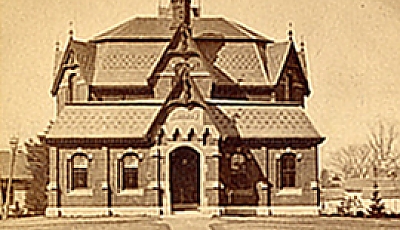 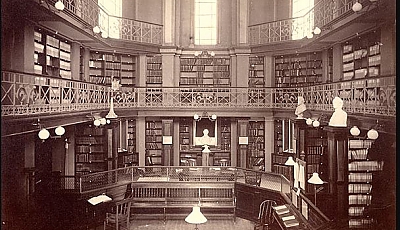 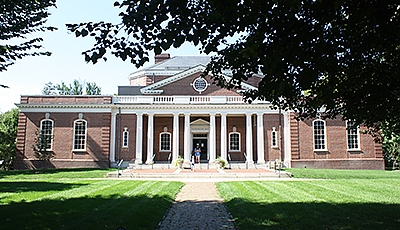 The Library was founded through the generosity and vision of William Munroe, a Concord native who made a fortune in dry goods and textiles and after retirement developed a desire to use his accumulated wealth to benefit the town where he had been born and raised. He established a public-private partnership between the Library Corporation and the Town of Concord. The Library Corporation would own the buildings, grounds, and art collection for the use of a public library and would be responsible for their maintenance, preservation, and stewardship. Munroe provided the funds for the original land and building. He masterminded the details of construction and operation. The citizens of Concord and their guests dedicated the Concord Free Public Library on Wednesday, October 1, 1873. The institution he established has ever since met the literary and information needs of local residents and visitors to Concord and served as a cornerstone of community life.

It is impossible to look at early photographs of the newly constructed Concord Free Public Library without realizing what an architectural novelty it must have seemed in 1873. Concord was, after all, still a primarily agricultural town with a population of not much more than 2,500 people and a pronounced local preference for traditional New England simplicity. Although it took some in town a little time to get used to Concord’s Gothic library, the opening of the new building and the expansion of collections and services that followed generated an enormous swell of community pride and support. Ralph Waldo Emerson himself delivered the keynote address at the library’s dedication on October 1, 1873, and served on its Library Committee. Throughout the 1870s, many Concordians and others gave freely from their personal collections to enrich the fledgling institution.

Splendid and spacious though the new library was, even William Munroe realized that it would not remain forever sufficient for the needs of a vigorous and growing town. Before he died, he made provisions for its eventual enlargement. In 1875, he had Snell and Gregerson draw up plans for extension. These plans called for two new wings off the rear of the building, one an enlargement of the circulating library area, one an art museum. (Art was a part of Munroe’s original vision of the Library, and this has developed into the William Munroe Special Collections.) The spired tower was to be preserved -- still part of the historic Library Rotunda. Munroe summoned the Corporation and Library Committee to a joint meeting on September 10, 1875. He presented the plans and turned them over to the Corporation for future reference. He died a year and a half later. In drawing up his will, Munroe acknowledged that “another half century of prosperity in New England” would necessitate expansion, and provided financially for the eventuality. Others augmented the building fund that Munroe had established.

Throughout its long history, CFPL has adapted to the needs of our community.  The Library Corporation has undergone campaigns to renovate in 1889 (when a school building from Sudbury Road was annexed to the back); in 1917 (when the tower came down to permit the construction of stacks); in the early 1930s (a renovation by Frohman, Robb & Little, who both enlarged the building and radically changed the style of its exterior from Victorian Gothic to Georgian); in 1938; 1968; 1986 to 1990 (a renovation designed by Perry, Dean, Stahl, and Rogers); and most recently from 2003 to 2005 (under J. Stewart Roberts & Associates - a largely systems-driven project that modernized and restored elegance to 129 Main Street). In addition, a separate facility for the West Concord Branch (Fowler) was dedicated in 1930.  The Fowler Library was renovated in 1996 and again in 2011.

None of this would have been possible without the consistent generosity and support of the people of Concord who understand, and champion, the importance of a great library to a community.